In my office, I have an actual component stereo system set up. It’s got a receiver, CD player, turntable, and speakers - most of which is circa 1990. And, it’s a fun thing for playing my ever-expanding record collection and CD collection on (and occasionally terrestrial radio, mostly WEVL and WYXR, though the RF noise from computers and such in there makes that difficult). It couldn’t do any sort of streaming, though. This is unsurprising as the newest thing in the stack hails from the era of the 9600bps modem. But, I thought it’d be nice to have a way to stream audio from a computer to it, or to maybe be able to queue up stuff from a service on it directly.

The obvious first step here was a Bluetooth receiver. I got a cheap one off of Amazon - which seemed to be a rebranded Logitech unit maybe? - and tried that out, but there’s a lot of 2.4GHz.. stuff so that was a bit of a no-go, even at the relatively short distance I had to go. Also, Bluetooth streaming is a pain in the ass. Sometimes I have stuff playing on my main PC, sometimes it’s coming from the Mac, sometimes a phone, and sometimes something else entirely, and switching between all of those requires re-pairing the device. It’s less than ideal.

But then I stumbled across an old Android phone, and had an epiphany - what if I could use that instead? At worst, I could probably load it up with Spotify and do stuff that way, or use YouTube on the device, but maybe there’s an app that’ll receive Chromecast or AirPlay I can get. So, I did a bit of searching and yep, there’s actually a bunch of those, most of which had demo versions. I did some testing of things, paid the ungodly sum of like $3 USD, and now I have AirPlay and Chromecast streaming to my stereo system. Initially, I used some cables I had lying around - all that was needed was a charger and an audio cable to go from the headphone socket to the receiver - but I cleaned it up a bit with some right-angle cables and some zip ties and stick-on mounting bits so that it could be anchored to the shelves the system sits on. I also added a fancy live wallpaper/screensaver thing and Nova Launcher, with settings tuned for always-on use, so it’s got a nice backdrop and some handy info on it too (the weather and the current time). With everything situated, it looks like this: 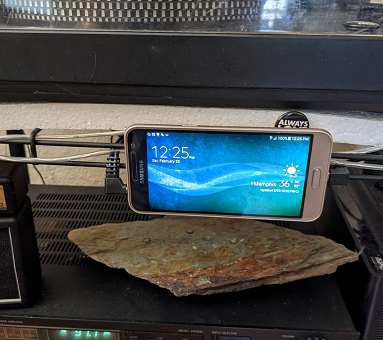 I suppose this picture could be worse, but I'm not sure how.

This is the hardware bill for this particular project:

The device is mounted just by sticky-backed mount loops I got from Monoprice; they’re meant to be stuck to flat surfaces and have a zip tie go through them so cables can be anchored to them. I put them on the back case and cinched them down with some zip ties to the wire shelf.

There are some things to keep in mind about this setup - having the screen on will reduce its lifespan, and it’ll be on the charger all the time so the battery will fry itself sooner rather than later. If you’re using a slightly nicer device, this may be something to think about. However, for me, part of the great thing about this is it mostly uses things that were lying around: an audio cable that was kicking around, a spare phone charger, the phone itself, though I did replace the cables with nicer ones. You’ve probably got an old phone in a drawer that works but is largely too old to be useful for much of anything, and that would be perfect for this. (Or, an old Android TV box - I have one of these too, running either Android 5 or 6, and it does this job quite well too. I preferred having a screen, though.) If you don’t have a spare phone, a second-hand one is easy enough to pick up, or there are some really good deals on pay-as-you-go Android phones out there as of this writing. (And, another nice thing is that I’ve now put that app on some other Android devices, including my straight up Android TV, so it too has AirPlay and all that now where it didn’t before.)

But, for just a little bit of work and a few dollars (plus a few more for fancy cables), I can now get a whole lot more use out of my stereo system. AirPlay works wonderfully on my MacBook and on my iPhone and via iTunes on Windows, and I can stream other stuff to it as necessary too quickly and easily.